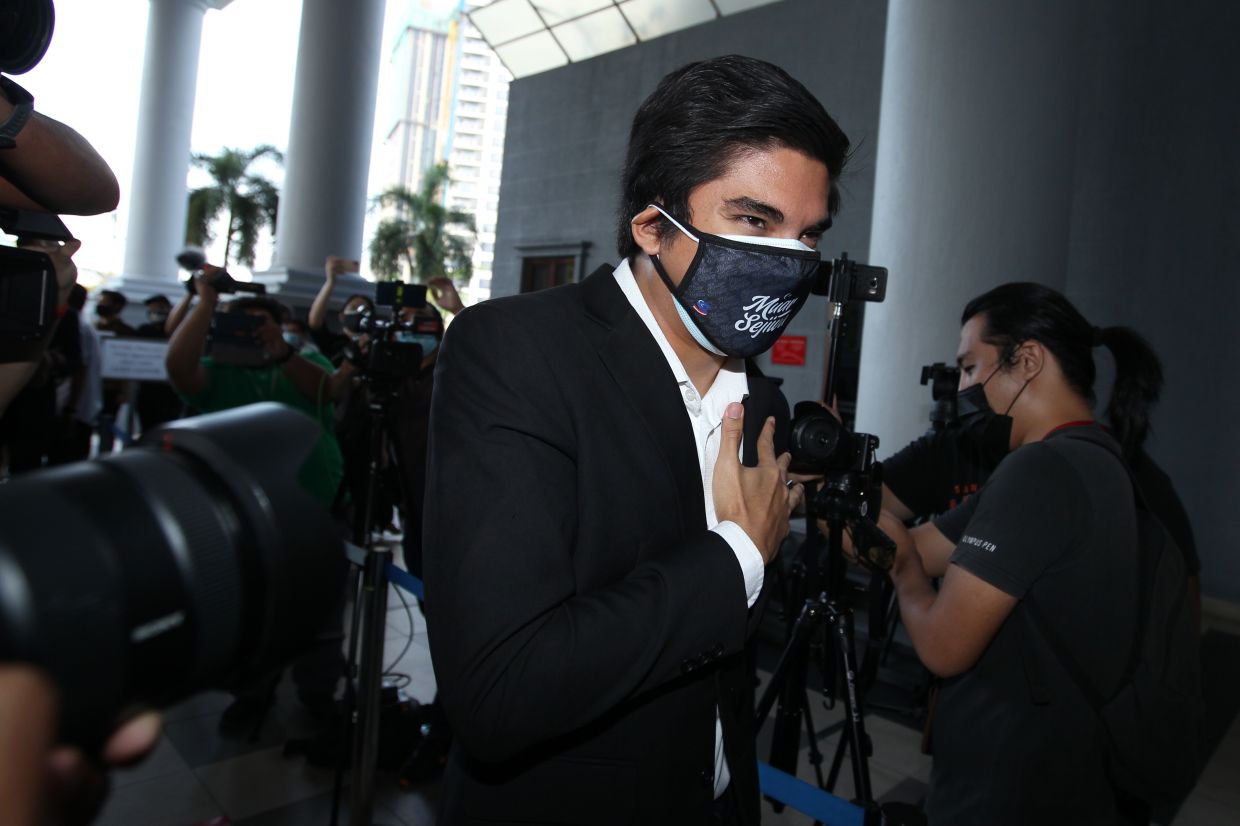 The 29-year-old pleaded not guilty after the charges were read out by a court interpreter before Sessions Court judge Azura Alwi here on Thursday (July 22).

Standing in the dock, the Muar MP said "Minta dibicara (I claim trial)".

According to the first charge, Syed Saddiq, as the youth leader of the party then, was entrusted with the funds belonging to the party's youth wing Armada Malaysia, and he allegedly committed CBT where he was said to have made a withdrawal of RM1mil through a cheque without the approval of Bersatu's top leadership.

Syed Saddiq was charged under Section 405 of the Penal Code and punishable under Section 406 of the same Code, where he faces up to 10 years imprisonment and whipping and liable to a fine.

For the second charge, Syed Saddiq was accused of misappropriating RM120,000 of contribution money that belonged to Bersatu, which was meant for the 14th General Election.

He allegedly committed the offence at Maybank in Taman Pandan Jaya, between April 8 and April 21, 2018.

The charge under Section 403 of the Penal Code carries imprisonment between six months and five years and whipping and can be liable for a fine.

He said the accused was a man of high standing in society and the court must consider his position as a bail factor.

"The bail amount should reflect his tall standing as this case will be getting a wide media coverage.

"It must reflect the serious offence. The amount proposed is not punitive or manifestly excessive if you consider these factors," Faridz said.

The prosecutor also asked the court to make an order for Syed Saddiq not to comment on his case in public as it would be tantamount to sub judice.

Lawyer Gobind Singh Deo objected to the bail amount and suggested RM20,000 instead.

"It is very excessive when the objective of bail is only to ensure the accused's presence in court," he said.

Gobind pointed out a document that showed the prosecution had obtained permission to prosecute seven months ago where the document was signed on Jan 4.

"We are now in July. If this is indeed a serious case, why are they only taking action now when we are three days away from Parliament sitting?" he said.

Gobind said his client was an active MP in his constituency and would not abscond.

On the gag order, Gobind said there was no basis for the prosecution to request such a blanket order.

Co-counsel Datuk S. Ambiga also stood up to object to the gag order.

"My learned friend mentioned there is a danger of sub judice. Sub judice is more relevant in jury trials.

"When they say sub judice, what they are really saying is that the court would be influenced by what the accused would say.

"We have a robust democracy, the court has never been influenced," she said.

Ambiga said a gag order sets a bad precedent and should be stopped.

"I must urge the court not to encourage this practice," she added.

She also ordered for the accused to surrender his passport to the court and report to the MACC office monthly.

The court did not make any gag order.

Gobind informed the court that his client would need some time to raise funds for the RM300,000 bail.

The judge then allowed for RM50,000 to be paid today and the balance to be settled by Tuesday while the RM30,000 must be settled in full today.

The cases have been fixed for mention on Sept 10.