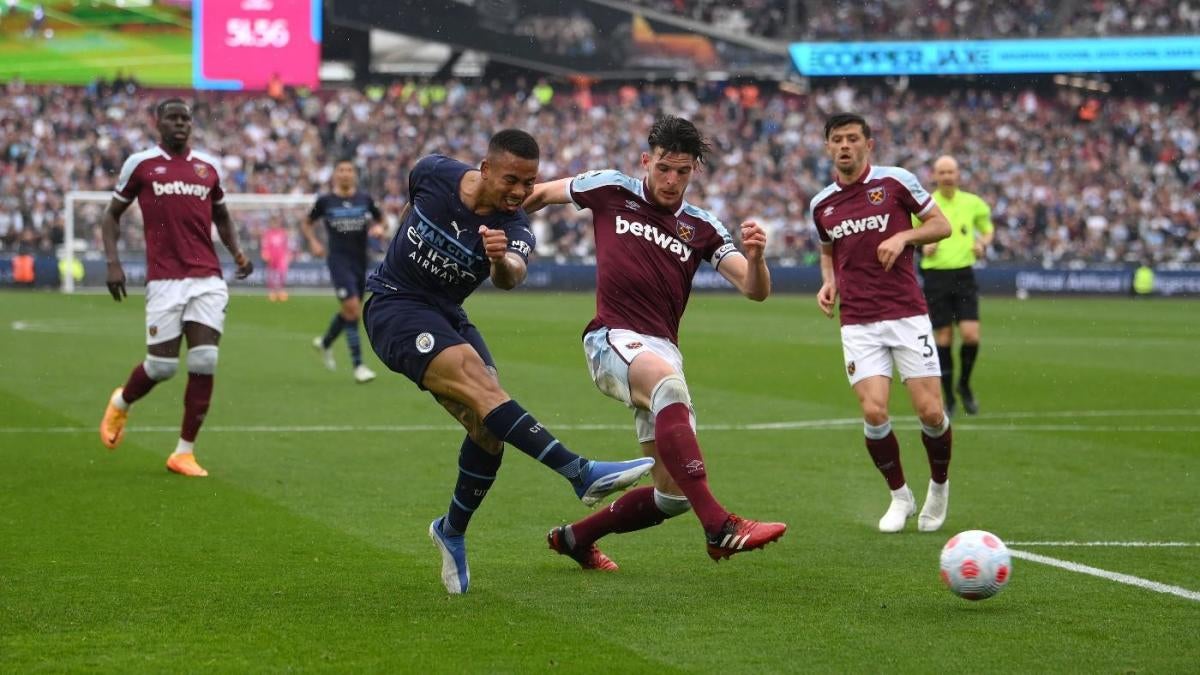 Manchester City clawed their way back to earn a 2-2 draw at West Ham on Sunday, giving themselves a title boost just after it looked like it could slip away. City trailed 2-0 at the break and rallied in the second half to take home a point, but Riyad Mahrez's late penalty miss means the title winners may not be decided till next Sunday.

A first-half brace by Jarrod Bowen would be cancelled out by a goal from Jack Grealish after the half and an own goal by Vladimir Coufal. City will feel like it was an opportunity missed, however, as Mahrez had a chance to get a winner late from the spot. After a VAR review, Craig Dawson was judged to have fouled Gabriel Jesus in the box. West Ham goalkeeper Lukasz Fabianski read it the whole way, saving the penalty from Mahrez to see the points shared.

It was a special atmosphere at the London Stadium as Mark Noble played his final home game of his West Ham career with a standing ovation in the 16th minute. His 549th appearance for the club was a special one as he helped play a crucial role in helping to secure a point with City pushing for the victory.

Defensive errors for Manchester City made things easy early on for West Ham as Jarrod Bowen found himself through on goal to round the keeper leading to the opener in the 24th minute.

While Ederson did what he could to keep Bowen out of the net, he was locked in to continue his special season that has seen him score 12 goals and assist 10 more. Michail Antonio would find Bowen for his second of the match as Fernandinho and Aymeric Laporte again got crossed up in defense losing Bowen for the equalizer just before the break.

City managed to come back with a hot second half with Grealish's goal in the 49th minute giving them life before the own goal in the 69th minute.

While it's a significant result in the title race, City being able to salvage a point is important as they are now four points ahead of Liverpool. The Reds travel to face Southampton on Tuesday and will need to overturn things in goal differential where they trail by six while also hoping that City drops more points on the final day of the season. But for West Ham, this is a result that could see them secure a Europa League spot on the final day as they trail Manchester United by only two points.

If Liverpool beat Southampton, City will just need to beat Aston Villa on Sunday to secure the title without relying on other results. But if Liverpool fail to win both of their remaining games, then it won't matter what City do in their season finale.

Guardiola won't be happy with the defense

It wouldn't be surprising to see Fernandinho benched for the final match of the season after that. He's already on the way out from Manchester after the season and his mistakes were too big to ignore in this one.

Guardiola won't be happy as Fernandinho only won 60 percent of his duels on the day. Along with Laporte, he was caught out of position multiple times while allowing West Ham to get off shots en route to their two goals. A slightly better defensive performance and City wouldn't have to sweat on the final day. The defense has been one of the hallmarks of City's strengths this season but with Ruben Dias, John Stones, and Kyle Walker all sidelined, Guardiola is left with tough decisions to make.

Laporte struggled too but it seems like he was rushed back after being withdrawn early in City's last match versus Wolves. Guardiola doesn't have many choices but with Aston Villa's attackers, they could be able to take advantage of mistakes in a similar way that West Ham did. There's enough midfield depth to pull Rodri back as a center back if needed while young CJ Egan-Riley could also be given a run out on the final day, though surely the club will want to avoid that.

State of the title race

With this draw, Liverpool have been handed a slight lifeline heading into their match. Off to Southampton on Tuesday, the Reds trail City by four points but things could get interesting down the line as the leaders also have a seven goal advantage when it comes to goal difference.

While a Europa League berth could feel like a slight disappointment for a West Ham side that was on track for a top-four place at different points of the season, with how thin the squad is, it would still cap an incredible season. Consecutive appearances in the Europa League would be a success for a club not used to this level of it. West Ham will need to defeat Brighton on the final day and see Manchester United drop points at Crystal Palace to clinch the Europa League spot. West Ham have a superior goal differential to United, so if they can match their points by winning and United drawing, that will be enough.